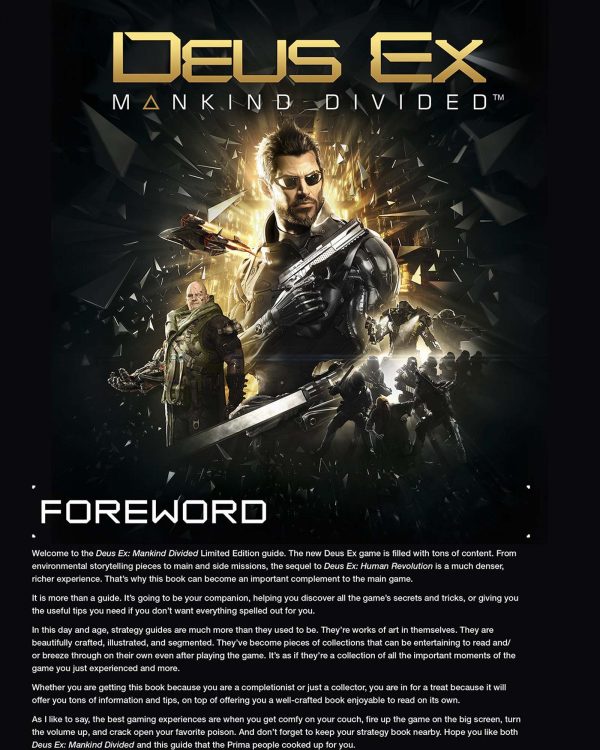 The year is 2029, two years after the events of Human Revolution and the “Aug Incident”—an event in which mechanically augmented humans became uncontrollable and lethally violent. Unbeknownst to the public, the affected augmented received implanted technology designed to control them by the shadowy Illuminati, which is abused by a rogue member of the group to discredit augmentations completely.

The year is 2029, two years after the events of Human Revolution and the “Aug Incident”—an event in which mechanically augmented humans became uncontrollable and lethally violent. Unbeknownst to the public, the affected augmented received implanted technology designed to control them by the shadowy Illuminati, which is abused by a rogue member of the group to discredit augmentations completely. The Illuminati successfully conceal the truth behind rumors and disinformation, while the augmented are now outcasts from normal humans in an era of “mechanical apartheid”.

The player character is Adam Jensen, an augmented former private security officer now working with a special Interpol unit to capture a terrorist group of augmented humans. However, Jensen also secretly works for the Juggernaut Collective, a hacker group helping him to confront the Illuminati.

As part of the anti-terrorist group Task Force 29, Jensen participates in a sting operation in Dubai in order to catch a weapon smuggler. However the operation goes awry when a mystery group of augmented mercenaries attempt to steal the weapon shipment. Jensen is able to neutralize the mercenaries and recover the weapons, though he suspects there was some ulterior motive for the mission.

Upon returning to Prague, Jensen meets up with his Juggernaut Collective contact, Alex Vega. She tasks him with planting an electronic bug in TF29’s communication systems to determine how deeply the Illuminati has infiltrated the organization. They are then caught in the blast of a terrorist bombing. Both Jensen and Vega survive, but Jensen suffers some damage to his augmentations. When he has his augs repaired, Jensen discovers that somebody had secretly installed several highly powerful and experimental augs in his body while he was recovering from the destruction of Panchaea. Upon returning to TF29’s headquarters, Jensen spies on a meeting between his commanding officer Jim Miller and his superiors, finding out that the senior UN leadership is intent on pinning the blame for the Dubai attack, the Prague bombing, and numerous other incidents on the Augmented Rights Coalition, a massive organization of augmented led by Talos Rucker, who preaches for equal rights for augmented people and claims he is a pacifist. Miller then tasks Jensen with infiltrating Golem City, a ghetto where augmented citizens are exiled to and where ARC is headquartered, to arrest Rucker. When Jensen confronts Rucker, Rucker points out that ARC has nothing to gain from killing innocent civilians, and suspects there is a traitor in ARC working for the Illuminati. However, Rucker suddenly and mysteriously dies right in front of Jensen, forcing him to flee. In the wake of Rucker’s death, his more militant and Illuminati-aligned lieutenant Viktor Marchenko assumes command of ARC.

Suspecting foul play, Jensen infiltrates TF29’s NSN system and learns that the Director of TF29, Joseph Manderley, is in league with Bob Page, the CEO of VersaLife. They mention the use of “Orchid” to murder Rucker, confirming that the Illuminati was behind his death. Jensen forwards the information to the leader of the Collective, Janus, and both of them agree that Orchid is some kind of biological weapon. However, the data pertaining to Orchid is stored in a secure vault in a nearby bank. At the same time, Jensen investigates the bomb attack and traces the bomb components to Allison Stanek, a former EOD soldier turned religious fanatic. Jensen then learns that VersaLife is removing all of their data from the bank and Stanek plans to commit ritual suicide with her followers to “ascend” to a purely electronic existence. Since both events are happening simultaneously, Jensen must choose whether to go steal the Orchid data or save Stanek so she can be questioned.

In either mission, Jensen obtains intelligence leading him to Marchenko’s headquarters in the Swiss Alps. However, upon traveling there, he is captured by Marchenko, injected with Orchid, and left to die. Jensen somehow survives the Orchid injection, obtains an Orchid sample, and overhears Marchenko mentioning he must return to Prague to smuggle cargo out of the city. He manages to escape the facility and returns to Prague to find the city under martial law as the augmented population riots over Rucker’s death. He reports his findings to Vega and gives the Orchid sample to her for analysis. Miller orders Jensen to spy on the local Dvali crime family to find out more about Marchenko’s plan. Jensen infiltrates the Dvali headquarters and finds out that Marchenko plans to attack a convention in London being hosted by Nathaniel Brown, an influential CEO who is lobbying against the Human Restoration Act, an Illuminati-backed law that would permanently segregate augmented and non-augmented people. Before leaving for London, Jensen meets with Vega one more time, who informs him that the Collective has determined that Orchid is a type of poison that causes an infected person’s immune system to go out of control, attacking their own organs. Jensen theorizes that that the same trait that allows him to use augs without the need for Neuropozyne also gives him an immunity to Orchid, which is why he survived. Jensen then leaves to stop Marchenko.

Upon arriving in London, Jensen and Miller meet with Brown, who refuses to cancel the event, citing that he is meeting with pro-Aug members of the UN Security Council. Upon further investigation, Jensen discovers that Marchenko’s men have secretly infiltrated the security forces and are planning to poison Brown and his guests with champagne spiked with Orchid. Miller is poisoned by Marchenko’s men, and dies unless Jensen chose to steal the Orchid data in Prague in which case he can administer an antidote to Miller, over Miller’s objection. Upon discovering Jensen’s presence, Marchenko gives Jensen an ultimatum: come confront him in the exhibition hall or he will detonate bombs he planted in two nearby residential towers. Jensen then must choose to either try and save Brown first, or confront Marchenko first. Depending on Jensen’s choice and performance, two endings are possible.

The “bad” ending occurs if Jensen fails to save Brown. Brown’s death at the hands of augmented terrorists serves as a rallying cry to have the Human Restoration Act passed, all according to the Illuminati’s plan. The “good” ending occurs if Jensen succeeds in saving Brown, who manages to successfully prevent the passing of the Human Restoration Act. If Jensen moves quickly enough, he can save both Brown and the residential towers. Regardless of the ending, Marchenko is either killed by Jensen or spared and apprehended by the authorities. ARC is officially labeled by the UN as a terrorist organization. Jensen and Vega, aware that the Illuminati are still out there and are scheming more plots, agree to continue the battle to expose them. In order to do this, Jensen asks to meet the Collective’ leader, Janus, in person.

In a mid-credits sequence, the Illuminati meets to deal with the aftermath of Marchenko’s attack, and they all agree to keep a closer eye on Jensen. It is also revealed that the Interpol psychologist Jensen worked with throughout the game is an informant for the leader of the Illuminati, Lucius DeBeers, and that they are using Jensen as an unwitting pawn to expose Janus